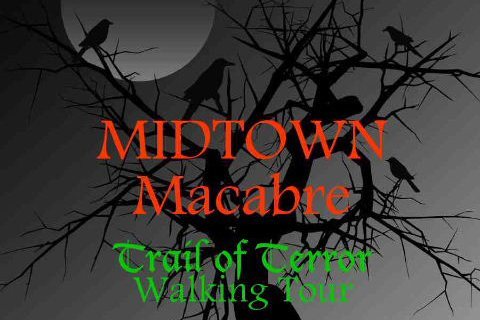 Ripped from the headlines of Detroit's past, and not so distant past, this chilling look at the city’s sinister side reveals a reality that’s much more frightening than fiction. Join Hometown History Tours this Halloween season - if you dare – as we traverse a tragic trail of terror and unmask menacing tales of depravity, rage, retribution, corruption, sadism, torture and pure evil that lurk below the surface of this trendy part of town.

"Be forewarned," says Hometown History Tours guide Karin Risko. " Popular haunted houses and ghost/paranormal tours, with their manufactured fright, are great fun and entertainment. They pale, however, in comparison to these terrifying true crime stories wretched from the headlines of Detroit’s past. It’s these vile and ghastly stories of brutality committed by real people - not ghosts and goblins - that will come to haunt your every thought and plague your dreams."

Historic Gothic cathedrals and Victorian mansions of bygone eras create an ominous setting for scary stories of murder, mayhem and mysticism in a part of Detroit once home to the infamous "Cass Corridor."

Expert guides will lead you down dimly lit streets and through shadowy back alleys where they’ll disclose gruesome true crimes of passion, greed, and sheer evil. Chilling stories of serial killers (several of which are still-at-large), brutal murders by loved ones, a dismembered doctor, a mob massacre, and more.

A trail of terror through Midtown wouldn’t be complete without dabbling into the occult and supernatural. Perhaps, we’ll be the lucky ones to raise Harry Houdini from the dead when we stop by the former funeral home where the famous magician briefly lay in state before his body was shipped to New York for burial. Maybe, along the way, we’ll spot Detroit’s version of Chucky - the doll inhabited by evil that comes to life and wreaks havoc - or other spooky specters.

"Your nervous laughter won’t keep the evil spirits at bay on this tour," adds Risko. "But don’t worry; we won’t mock your feeble attempts to contain your fright."

Cost for the Midtown Macabre: Trail of Terror Walking Tours is $15 per person in advance and $20 on the day of the tour. Tours run approximately two hours in length and cover approximately two miles. Tours are probably not appropriate for young children or the faint of heart! In the end, it’s your call.

Tours depart promptly from the lobby of The Park Shelton, 15 East Kirby, Detroit.