Travel Channel: "These Woods Are Haunted" and Other Paranormal Shows Back with New Seasons 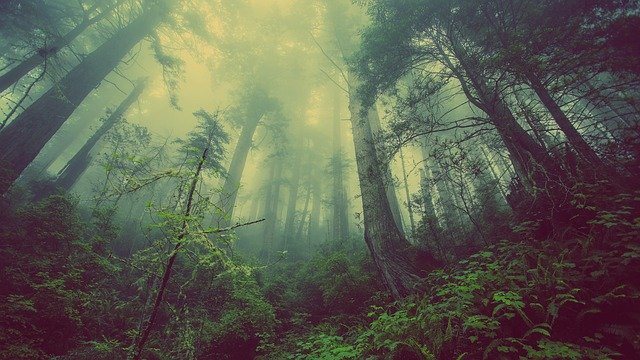 The woods are filled with mysteries that sometimes cannot be explained.
Photo by: Free-Photos

THE ALASKA TRIANGLE
Alaska is the most sparsely populated of all the states. In a vast expanse of rugged wilderness, one area – known as “The Alaska Triangle” – has been home to so much unusual activity that it has struck fear across Alaska and the world. More people disappear in this area than anywhere else in the United States, with countless sightings of strange creatures, impossible moving lights in the sky, unexplained phenomena and even malevolent ghosts. Are lay lines and electromagnetic anomalies within the Triangle causing these bizarre events? Or is something more sinister at play? From strange reports of military personnel seeing UFOs and missing aircrafts that have vanished without a trace, to sightings of fearful monsters and an underground alien base hidden inside a mountain, each episode of “The Alaska Triangle” seeks to unlock the paranormal mysteries hidden within this foreboding location. [Hour-long episodes]

SERIES PREMIERE: “The Secrets of Mount Hayes” – Premieres Sunday, February 9 at 10 p.m. ET/PT
An eyewitness shares startling video evidence of extraterrestrial activity in Fairbanks, Alaska, and a UFO hunter flies over Alaska’s highest mountain in search of a secret underground alien base.

“Alaskan Bigfoot and Mysterious Forcefields of the Triangle” – Premieres Sunday, February 16 at 10 p.m. ET/PT
A cryptozoologist hunts for scientific proof of Bigfoot in the remote Alaskan wilderness, and experts investigate a mysterious vortex of energy that may be behind unexplained disappearances and paranormal activity in the Alaska Triangle.

THESE WOODS ARE HAUNTED
The great outdoors aren’t always so great. In fact, the woods are filled with mysteries that sometimes cannot be explained. These are the true accounts of people who ventured deep into the forest only to come screaming out with stories that defy reality. [Hour-long episodes]

SEASON PREMIERE: “It Came From Hell and Ozark Bigfoot” – Premieres Sunday, February 9 at 9 p.m. ET/PT
A late-night fishing trip becomes a living nightmare when two brothers encounter a monster at the lake. Three Bigfoot hunters become the hunted while camping in the Ozarks.

“Was It Trying to Kill Me? and The Blue Ridge Encounters” – Premieres Sunday, February 16 at 9 p.m. ET/PT
A supernatural forest creature stalks a young man in Colorado. Two friends are haunted by ghostly activity and demonic growls after a strange encounter in the Blue Ridge Mountains.

PARANORMAL CAUGHT ON CAMERA
Some of the most amazing, eye-opening and downright scary paranormal videos from around the world are featured as a panel of experts breaks down the footage and analyzes what exactly the eyewitnesses captured. Insights from some of the most knowledgeable specialists in the field and firsthand accounts from the people lucky enough – or perhaps unlucky enough – to witness these strange phenomena for themselves just might make a believer of even the biggest skeptics out there. [Hour-long episodes]

“Uninvited English House Ghoul and More” – Premieres Wednesday, February 5 at 9 p.m. ET/PT
A paranormal presence follows an investigator home, a UFO plays chicken with a freighter, a fearless family captures compelling evidence of Bigfoot and the ghost of a small child runs through a Savannah cemetery.

“A Shadow Creature in Maine and More” – Premieres Wednesday, February 12 at 9 p.m. ET/PT
A man encounters a terrifying shadow creature in his bedroom, an unidentified light is spotted above Fairbanks, Alaska, and a Detroit brewery is visited by an angelic entity.

GHOST ADVENTURES: SCREAMING ROOM
Paranormal investigators Zak Bagans, Aaron Goodwin, Jay Wasley and Billy Tolley are opening up to viewers as they’ve never done before in Travel Channel’s new series, “Ghost Adventures: Screaming Room.” The guys are kicking back in their screening room to watch their favorite episodes of the hit series and get candid with fans – and each other – about their craziest experiences over the past decade. Away from the haunted locations we usually see them in, with no equipment or investigations, the crew will relive some of the most terrifying, shocking and even comedic moments from their career, as they re-watch their most memorable investigations with never-before-heard stories from the moments that created a legacy. Get ready for laughs, screams and surprises alongside the crew in the ultimate tell-all event. [Hour-long episodes]

“Believe It!” – Premieres Thursday, February 6 at 9 p.m. ET/PT
Zak Bagans and the team look back at the collection of oddities that is Ripley’s Believe It or Not! museum, where after encountering the ancient spirit of a stolen mummy Bagans reveals his love of … feet?

New Episode – Premieres Thursday, February 13 at 9 p.m. ET/PT
Zak Bagans and the guys revisit the Enchanted Forest, an amusement park in rural Oregon where Aaron Goodwin spent much of his childhood and where they encountered bizarre entities including the spirit of … Humpty Dumpty?

KINDRED SPIRITS
Paranormal investigators Amy Bruni and Adam Berry, along with psychic medium Chip Coffey, enter America’s darkest locations, demanding answers to the most chilling haunted mysteries. Bringing peace to the living by giving a voice to the dead, their multilayered investigations dig deep into the past to identify the restless spirits and analyze the threat. Throughout the season, America’s most intense paranormal activity takes them to evil and historic locations, including properties that were used as orphanages and asylums, as well as personal homes inhabited by aggressive entities.
[Hour-long episodes]

“Nowhere to Run” – Premieres Friday, February 7 at 9 p.m. ET/PT
Paranormal investigators Amy Bruni and Adam Berry help a single mother left home alone with two frightened children after terrifying, full-bodied apparitions drove away her family. Psychic medium Chip Coffey must figure out who – or what – is to blame.

“The Trunk” – Premieres Friday, February 14 at 9 p.m. ET/PT
Amy Bruni and Adam Berry visit a Florida museum where multiple attacks on volunteers have sparked the urgent need for a paranormal investigation. They bring in psychic medium Chip Coffey to find out why the aggressive entity is lashing out.

GHOST LOOP
The all-new series “Ghost Loop,” follows a team of highly specialized paranormal experts – paranormal investigator and medium Sean Austin, empath Kris Star, researcher and tech advisor Chris Califf, design specialist Eric Vitale and tech support Matt Lytle – who focus on the distinct type of haunting known as a “ghost loop.” This is when paranormal entities terrorize the living through endless and repetitive supernatural cycles, manifesting again and again in the same location. The team will attempt to break these cycles of trapped paranormal activity and restore peace to both the living and the dead by drawing out each spirit through re-created trigger environments. [Hour-long episodes]

“Secret Slaughter” – Premieres Friday, February 7 at 10 p.m. ET/PT
A couple calls on the team to investigate an aggressive ghost that’s terrorizing their three-year-old son in Auburn, Washington. They’re worried the activity will escalate and hurt their three young children if the vengeful spirit isn’t stopped.

“Demon Mine” – Premieres Friday, February 14 at 10 p.m. ET/PT
The team heads to South Jordan, Utah, where a demonic entity is tormenting a woman and her son on a nightly basis. They step up to cast out the demon and save the beleaguered family from a terrible fate.

HAUNTED HOSPITALS (U.S. Premiere)
“Haunted Hospitals” tells chilling tales of paranormal activity inside hospitals, nursing homes, morgues and medical institutions. Past patients suspended between this world and the next, departed medical professionals who insist on overseeing their wards long after death, spirits roaming corridors to signal unfinished business with their presence – these terrifying stories are told by the medical professionals and patients who experienced them. These are not random encounters, but part of paranormal patterns experienced by hospital staff all over the world. [Hour-long episodes]

“Calls From Beyond, The Grim Reaper and Tagged by a Spirit” – Premieres Saturday, February 8 at 10 p.m. ET/PT
An IT technician receives mysterious phone calls while working the graveyard shift at a hospital, a nurse battles the Grim Reaper to save a patient’s soul and a ghost girl plays deadly games with terminally ill children.

“The Suicide Room and The Little Boy” – Premieres Saturday, February 15 at 10 p.m. ET/PT
An eerie shadow figure attempts to attach itself to a psychiatric patient and an ICU nurse faces the wrath of the Grim Reaper.

LOST IN THE WILD
In the new series, “Lost in the Wild,” filmmaker and explorer J.J. Kelley and journalist Kinga Philipps are reinvestigating perplexing cases of adventures gone terribly wrong, where people have met mysterious ill-fated ends. Venturing into the perilous unknown in search of answers, the duo pick up where the official investigation has ended and set off on foot to follow the path they believe will lead them to answers. From trekking deep in the Amazon jungle in search of idealists looking for a lost city to climbing a treacherous mountain in Africa where dozens have vanished, the duo combine their wilderness and sleuthing skills to navigate their way toward the truth, testing their own limits to investigate missed clues and new evidence behind these baffling cases. [Hour-long episodes]

“Africa’s Cursed Mountain” – Premieres Sunday, February 9 at 11 p.m. ET/PT
J.J. Kelly and Kinga Philipps investigate the 2014 disappearance of a man on Zimbabwe’s fabled and feared Mount Nyangani. The treacherous climb leads them to a confrontation with a danger that could crack the case – if it doesn’t claim their lives first.

SEASON FINALE: “Evil Woods” – Premieres Sunday, February 16 at 11 p.m. ET/PT
Kinga Philipps and J.J. Kelley venture to the Philippines to investigate the disappearance of Bryan Francisco, a young man said to have been lured into a vast forest by shadowy forces that defy description. They reexamine the route that search and rescue parties took when looking for him and learn of a recluse living on a nearby mountain who may know the truth about what happened – and might even be living with him. They ultimately make a discovery that is equal parts horrifying and heart-rending – that some who are lost in the wild might not want to be found.