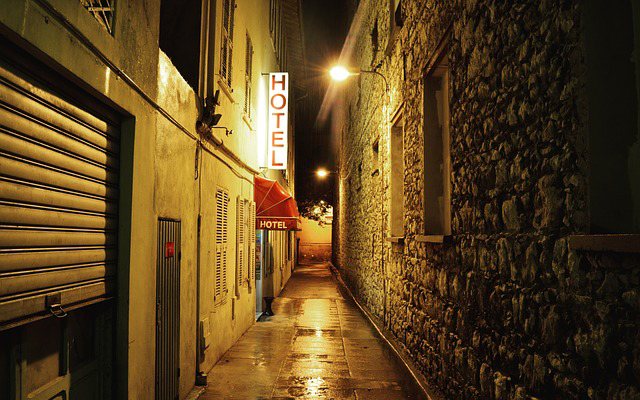 Book an overnight in New York State, and you might just have some unexpected guests join you. On the Haunted History Trail of New York State, our hotels, bed & breakfasts, and inns have become home to the paranormal -- ghosts who have checked in and never bothered to check out.

At The Naples Hotel, in the heart of the Finger Lakes region, owner Dominick Gallo welcomes visitors to stay the night and meet the friendly spirits who roam the inn. Candlelight dinners and ghost tours are a regular activity offered by The Naples Hotel, or simply ask for a ghost tour when checking in for an overnight stay. The hotel's 32 rooms are frequently visited by at least six friendly spirits, including a woman and her children, and a gentleman named Topper. They are known to play minor tricks like moving pictures or locking doors, but otherwise will let you enjoy your stay in relative peace.

On the other side of New York State in the Catskills, lies the Burn Brae Mansion -- a personal favorite of The Exorcist actress, Linda Blair. Blair has noted that Burn Brae Mansion is a favorite of hers when visiting New York State, possibly due to its beauty and architecture, its rich history, or the mysterious sights and sounds that are often reported by guests. The Burn Brae Mansion offers group investigations by appointment and frequently hosts events like its Murder Mystery dinners. Those staying overnight can request a guided tour of the mansion, including rooms like the "Attic of Curiosities." You never know what you might find there.

Another haunted hotel, The Shanley, in Napanoch, NY takes true pride in its spooky side. Known as a paranormal hotel that was featured on TV shows such as "Ghost Lab" and "Ghost Hunters," the Shanley Hotel does not shy away from showcasing to guests the many spirits that reside there. Ghost tours and investigations are included in the price of an overnight, or visitors can pay solely for a guided tour and exploration. Day and night, there have been reports of rocking chairs that rock on their own, mysterious clocks chiming, cold and hot spots, whistling, piano music, footsteps and the sounds of children's laughter.

One of America's great Victorian houses, the Batcheller Mansion Inn, allows guests to book the entire mansion to conduct their ghostly investigations. Located in Saratoga Springs, this mansion has been restored to its original beauty and featured on HGTV's Front Door Series for Victorian Architecture. But the rumor is that there is more to the mansion than meets the eye. George Batcheller and his family are said to still reside within the mansion's walls, and sometimes make an appearance to staff and guests alike.

Another Victorian beauty, the Pine Bush House Bed & Breakfast, was built in 1905 in Pine Bush, NY. Each of the rooms in the house boasts a unique decorating style, and each has a different ghost frequenting that bedroom. Overnight accommodations coupled with ghost investigations are available, as are psychic readings -- which will introduce the resident haunts to those too nervous to investigate themselves. Special ghost tour & psychic reading packages are available now at $20 per person.

Across the Haunted History Trail of New York State, these and other hotels and inns welcome visitors in for a stay and, possibly, a scare. Places like the Brae Loch Inn, the Glen Sanders Mansion Inn, The Pillars Estate, the Red Coach Inn, Heaven Sent Bed & Breakfast and the Allegiance B&B also lie along the trail, each telling their own unique story to the visitors who choose to spend the night.

About the Haunted History Trail of New York State

From the great spirits invoked by early Native American tribes, to the first Dutch settlers who carefully avoided haunted places, New York has harbored centuries of spooky events that simply can't be explained. Interest in the eerie has steadily increased with television and movies exploring the ghosts, UFOs, and things beyond the realm of human understanding. All of this awaits you on the Haunted History Trail of New York State as it takes you to the places where human forms come out of the mist and strange lights wink from the dark.